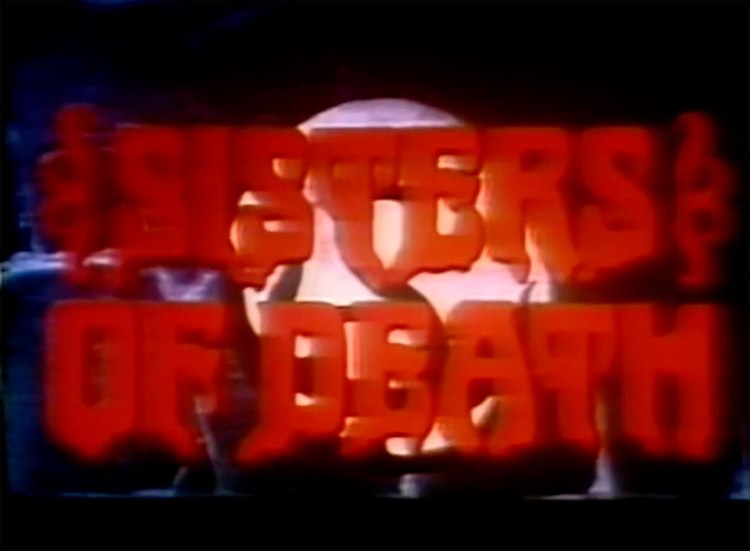 An occult-tinged sorority initiation leads to the death of a pledge in a prologue that teases a different sort of horror experience than the film actually delivers.

Seven years after the hazing death, the surviving sorority members receive an anonymous invitation to a reunion in Paso Robles. Why Paso Robles; why NOT Paso Robles? Seemingly unfazed by their tragic past—or irresistibly drawn to the prospect of a full welcoming champagne brunch—they gather at a remote estate, only to find themselves trapped and isolated inside an electrified fence.

“I really don’t think you should take a shower.”

The purported culprit of this proto-slasher reveals himself early, as the sisters begin to be killed one by one. For a seventies horror, the film is remarkably tepid, almost playing like a made-for-TV project. The kill sequences are mostly bloodless, and the most suspenseful scene arguably involves a tarantula crawling across a bed. Later, the film resorts to another potential animal attack, this time a rattlesnake, to wake up its audience. Even after abandoning all pretense of reason with a laugh-inducing set-up involving a character announcing that—in the middle of all the murders—she intends on taking a shower, the ultimate payoff fails to generate any shock or titillation.

Logic unravels completely at the finale, but the unexpected introduction of a gatling gun almost compensates.

END_OF_DOCUMENT_TOKEN_TO_BE_REPLACED 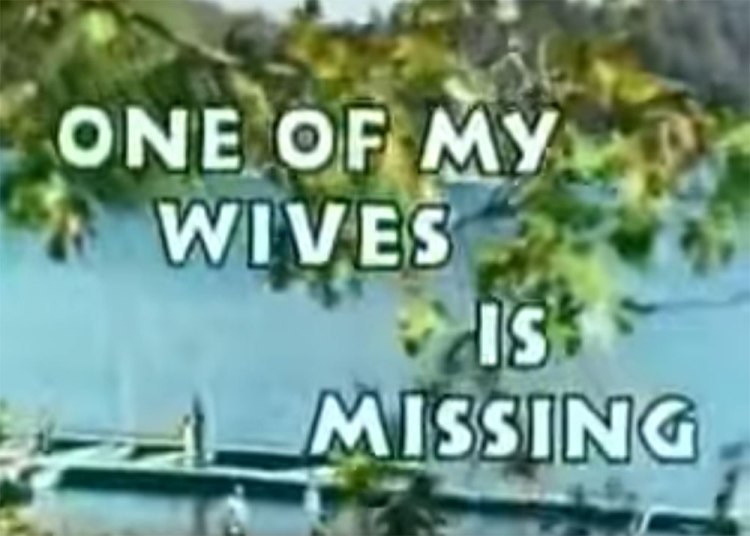 Daniel Corbin (James Franciscus; Beneath the Planet of the Apes) has a problem. His wife, Elizabeth, is missing, and the local small-town police seem uninterested in pursuing the case. Her sudden return, however, elicits an unexpected reaction: Corbin claims that the woman (Elizabeth Ashley; The Carpetbaggers) is not, in fact, his wife.

Inspector Murray Levine (Jack Klugman; The Odd Couple, Quincy), a former New York City detective, takes a break from eating his favorite pastrami sandwiches at the local deli to investigate the unusual claim. The new Mrs. Corbin insists that her husband suffers from a mental condition and has been receiving long-term treatment from a psychiatrist, including prescription drugs, and could potentially be on the brink of a nervous breakdown.

Set almost exclusively in the interior rooms of a remote country resort, the moribund production clearly reflects the stage origins of its source material. Evidence shifts and suspicions turn as characters exit stage right, stage left, or step briefly outside or upstairs. The priest who reintroduces Mrs. Corbin after her disappearance hangs around long enough to eventually nap on the sofa.

James Franciscus brings a golden-boy smugness to his role, although perhaps shouting a few too many lines along the way. Elizabeth Ashley delivers a smoky allure as the femme fatale, changing through a series of nightdresses along the way. Meanwhile, Jack Klugman channels his inner-Quincy, madly gesticulating, chewing up the scenery, and tossing off some groan-worthy comic zingers with fearless aplomb.

One of My Wives is Missing attempts at least one too many puzzle-within-a-puzzle twists—and instances of blanks being fired—before spinning off into a convoluted silliness that defies any continued suspension of disbelief. [Hey, Quincy…er… Detective Levine, instead of neglecting a crime scene and spinning an elaborate charade, how about just collecting some forensic evidence?] Certainly not a lost classic awaiting rediscovery, but a modest curiosity for Quincy fans searching for a cheap YouTube distraction.

END_OF_DOCUMENT_TOKEN_TO_BE_REPLACED 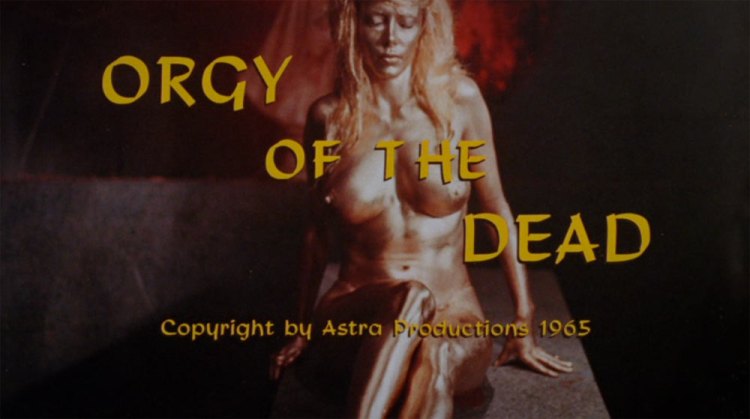 “No one wishes to see a man dance.”

Driving at night in search of inspiration, horror writer Bob (William Bates) and his girlfriend Shirley (Pat Barrington) crash their car, inadvertently stumbling upon a strange ritual underway in a remote cemetery. An evil Master of Ceremonies (Criswell, Plan 9 From Outer Space) and Vampira look-alike Black Ghoul (Fawn Silver) conduct a series of performances under the full moon designed not only for their own macabre viewing pleasure, but also to test the very souls of the damned performers. Captured by the evil pair’s inexplicable Mummy and Wolfman minions, Bob and Shirley are forced to watch the proceedings, while waiting for their ultimate fate to be decided.

Enhanced by garish colors and an inherently appealing mid-sixties style, a full dance card of nudie performances by Zombie Girl, Cat Girl, Streetwalker Girl, Slave Girl, Indian Girl, Gold Girl, and more (equally stereotyped) follows, all accompanied by groovy instrumental scores. The two hosts leer and nod, with Criswell appearing to read his lines from cue cards, while the classic monster minions spout some corny shtick from the sidelines. Bob and Shirley wiggle against their bonds while more performers gyrate through a dry-ice fog, hanging low over a cemetery setting that appears to have been leftover from a late-night horror television show.

This jiggly curiosity delivers a delirious mid-century visual treat—to the right audience—for a short while, but becomes something of an endurance test at feature film length.

END_OF_DOCUMENT_TOKEN_TO_BE_REPLACED

Susan Denberg | Frankenstein Created Woman | Hammer Studios | 1967
“Born Dietlinde Ortrun Zechner on 02 August 1944, model/actress Denberg was brought up in the Austrian resort of Klagenfurt. At eighteen, she left for London, where she worked briefly as an au pair before auditioning for the renowned Bluebell Girls troupe. Touring in America, she signed with Warner Bros. to play a randy German chambermaid in the film An American Dream, and featured in an early Star Trek episode, Mudd’s Women. Playboy magazine selected her as its centrefold of August 1966 and soon after she was chosen as Hammer’s Christina [Frankenstein Created Woman]. Post-Frankenstein, however, she became plagued by mental health problems elicited by drug abuse. Recovered, she sold her story to the News of the World in November 1969, apparently in anticipation of a comeback that wasn’t to be.” — The Hammer Story, Marcus Hearn & Alan Barnes, Titan Books, 1997

END_OF_DOCUMENT_TOKEN_TO_BE_REPLACED

“Ingrid Pitt was offered the starring role in The Vampire Lovers soon after meeting [film producer] James Carreras at the premiere party for Alfred the Great in 1969. The full-frontal nudity demanded by the script bothered her little. ‘I remember my first nude scene with Maddy Smith was coming up and, although neither of us particularly minded, at that time it wasn’t an everyday event. Jimmy Carreras was okay about it, but I was told the other producers, Harry Fine and Michael Style, were a bit po-faced. I was walking to the stage when I met Fine and Style, looking very dejected, walking in the opposite direction. I felt so sorry for them. As I drew near, I stopped and ripped open my dressing gown with all the brio of an experienced flasher on Hampstead Heath.’” – The Hammer Story: The Authorized History of Hammer Films, Marcus Hearns & Alan Barnes, Titan Books, 2007.

END_OF_DOCUMENT_TOKEN_TO_BE_REPLACED 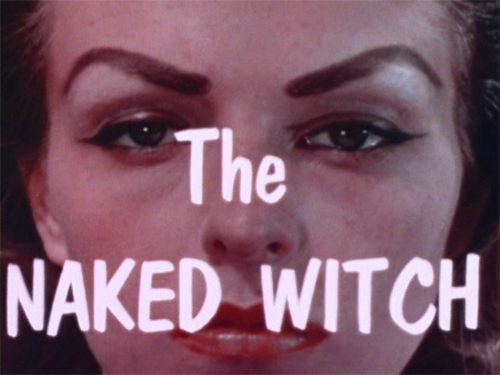 After a patience-testing voiceover on the history of witchcraft, with accompanying images of Hieronymus Bosch paintings, the story finally begins with an unnamed college student (Robert Short) arriving in a small Texas town. Immediately launching into another pseudo-historical voiceover narration, the student details the history of the isolated German immigrant community he has come to study. Interested in the folklore of witchcraft and the occult in the town, the student discovers that local residents are unwilling to talk about their superstitious beliefs.

Breaking the communal silence, Kirska (Joy Maryman), the coquettish innkeeper’s daughter, gives the student a one-hundred-year-old book about the Luckenbach Witch, a local widow who was accused of witchcraft by an adulterous husband. Before being staked to death for her alleged crimes, the widow places a curse on all the descendants of her accusers. Drawn to the (remarkably shallow) grave of the witch in the story, the student removes the fatal stake and inadvertently resurrects the slumbering witch (Libby Hall).

Taking time out for the occasional skinny dip in the vegetation-laden local pond, the witch pursues her century-old revenge against the townspeople. Splashing about in the water, hair and make-up continuity errors arguably outnumber the awkward teases of nude flesh. Guilty about his role in the witch’s return, the student pursues her (with the help of the local librarian), to a nearby series of caves. Falling under the witch’s seductive spell, the student must struggle to save her final victim—Kirska!

A low-budget titillation for its time, The Naked Witch possesses a certain charm with its artless framing, sporadic organ score, and poorly synced dialogue. However, today’s viewers may want to save the full 59-minute running time (which seems much longer), and derive a greater and more immediate reward by simply Googling “naked+witch”.

END_OF_DOCUMENT_TOKEN_TO_BE_REPLACED 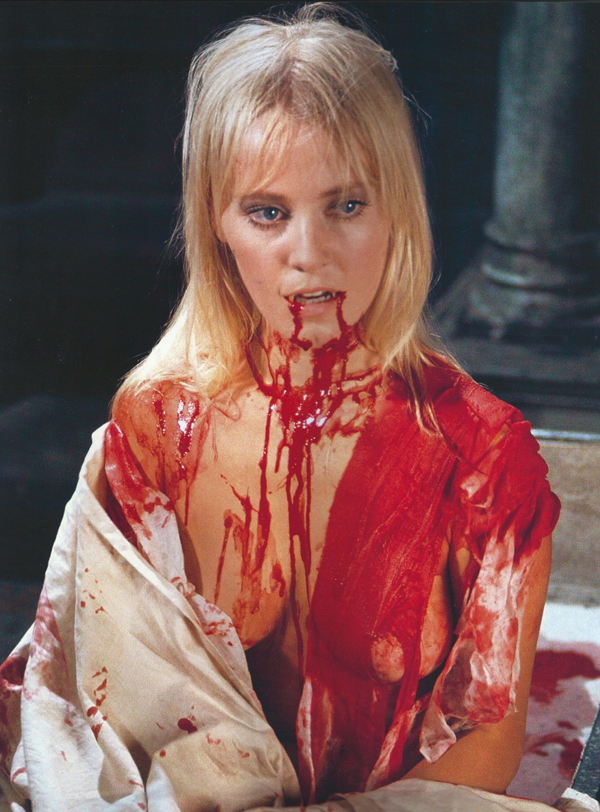 “Lust for a Vampire is a cynical and depressing exercise that has all been disowned by its director.” – The Hammer Story: The Authorized History of Hammer Films, Marcus Hearns & Alan Barnes, Titan Books, 2007.

END_OF_DOCUMENT_TOKEN_TO_BE_REPLACED

The Biblioteca Filosofica holds an elusive volume on a mysterious architect and alchemist.

END_OF_DOCUMENT_TOKEN_TO_BE_REPLACED

“Margaret (Valerie Leon) suffers a recurring nightmare in which she sees an ancient Egyptian queen, to whom she bears an uncanny resemblance, sealed up in a sarcophagus. The priests who entomb her first chop off her hand, but, after throwing the member to the jackals, are killed by a mysterious and powerful force that lacerates their throats. The day before her birthday, Margaret’s father, archaeologist Professor Fuchs (Andrew Kier), gives her a ruby ring. It transpires that the ring was discovered when, twenty years before, Fuchs…broke into the tomb of Queen Tera and found the ring on her disembodied hand. Her perfectly preserved body lay in a golden coffin beside it, with the stump of her arm leaking blood. At that moment, thousands of miles away, Margaret’s mother died giving birth to her. Margaret, it seems, is a vessel for Tera’s magic. Soon, when a certain celestial conjunction is complete and three artifacts assembled beside Tera’s corpse, this evil sorceress will be born anew…” – The Hammer Story: The Authorized History of Hammer Films, Marcus Hearns & Alan Barnes, Titan Books, 2oo7.